Men in Nursing: What’s Being Done to Appeal to the Male Caregiver?

Often minority groups are aligned along a spectrum marked off by metrics of culture, ethnicity, sexual orientation, religion, and gender. African Americans, Asians, Hispanics, and women constitute the largest subsections on any given minority measuring stick. However, rarely does a category directly relate to males. But in the nursing world, men are considered a minority.

The nursing field was founded by women and populated by women. There have been distinct fluctuations in this gender specific paradigm over the years, but many specialties of nursing remain largely women-driven. What nursing specialties appeal more to men than women? What particular alterations—good and bad—could come from a more 50/50 mix of male and female nurses? And how does the nursing school sector begin to remake its image so that it appeals to both genders? 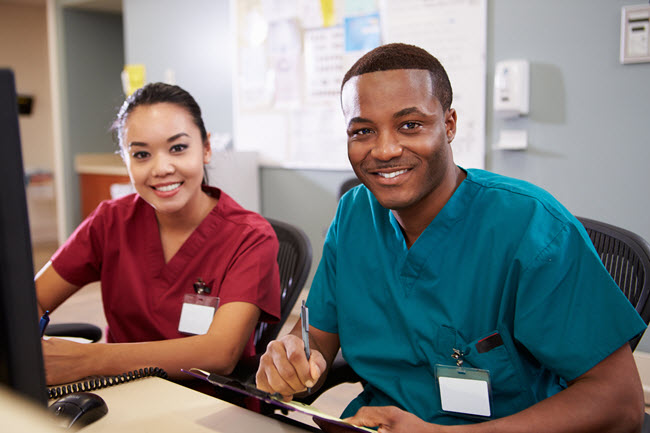 The Numbers Tell All

Male RNs constitute a fraction—5.7%--of the RN population in the U.S. Granted this number has blossomed just over the last decade or so, but real innovation must happen to attract more men to the profession. Perhaps the real mission is to convince them that nursing is a viable, competitive, challenging career that is also stable even during economic downswings. Initial education is affordable, and scholarships, loan repayment plans and other pros should become big-ticket items to males looking for a serious career path.

Men should not think twice about the nursing field. If nothing else, the nursing shortage alone should be indication of the job opportunity available. Historically, women have been regarded as the caregivers, a personality trait required of nurses. This image still seems to off-put some men to the nursing profession. If you take the time to read the most recent survey of male nurses from Male Nurse Magazine you’d see many survey respondents said outright that they always wanted to help people. Sound too womanish?

Big social changes have forced men into more care-related roles. Once upon a time, women stayed at home, took care of the nurturing side of life, while men were breadwinners. Today most women work outside the home; they have many career options open to them, another reason why the nursing shortage is so glaring. Men have had to step up and take their turn as caregiver in the home as well as without.

Not all facets of nursing appeal to men. Those that top the list of most popular specialties among male nurses are: Critical Care, Emergency and Trauma Nursing, Flight Nursing, and Med-Surg make up the top level of RN specialties. But men also exhibit a strong desire to pursue their nursing careers into advanced practice degrees, such as nurse manager and nurse educator.

In fact, salary and career opportunity for nurses led one survey respondent to reply, “It’s a no-brainer.”

Nursing is as white as it is female. For minority males there may be no finer time to get a foot in the door. There are increasing numbers of nursing programs that specifically aim a part of their recruitment at the minority male population; and scholarships designed for the same. At the same time there is also talk about nursing school discrimination, for minorities and especially for men. The concern is that many nursing faculty remain tuned to the female perspective, from curriculum to practice. This antiquated attitude leaves men out in the cold on many fronts and does little to attract any but the most tenacious and tolerant male students.

In government the heat is on to combat the epidemic size nursing shortage and part of the remedy is a battery of new big money grants from the Feds. The High Growth Job Training Initiative metes out millions of dollars to various regions or states heavy with minorities, beginning with Florida and Texas. In turn, monies are used to ramp up and expand Critical Care nurse training programs for minority nurses, including men.

Marketing is the real crux of the male shortage issue: how to renovate nursing so that it appeals to men. The University of Washington School of Nursing has worked hard to engage a population of male nursing students for the express purpose of redesigning a program aimed at the male population. It’s clear that marketing is a big aspect of nursing, particularly the images used to appeal to nurses. UW-SON discovered that most of their participants suggested selling a program using images of nurses clearly chosen to depict diversity. There was also contention over the continued devotion to the nurse perspective as “she” in a lot of traditional and contemporary written material and curricula attached to nursing programs.

Unfortunately what the nursing profession may need, before it really pulls in the volume of male nurses for which it hungers, is a salary revamp. This of course could be a real slap in the face for women nurses who’ve suffered low salaries for decades because of the gender attachment. But for many men, salary and tangible career opportunity matter as much as a desire to help others. They’ve had alternate career options from the get-go; they can choose other routes to the same types of salaries when some women still cannot.

There are only a couple of resources specifically designed for male nurses, but they provide support, professional information, scholarships and funding, and links to pertinent political and social agendas: