After the army was created in 1775 to fight in the revolutionary war, Commander George Washington was made aware that the wounded and sick required good female nurses, as the wounded soldiers suffered greatly. This request was made by major general Horatio Gates and George Washington asked congress to provide nurses that would attend the sick and for a matron to supervise these nurses. In July of the same year a plan was created that provided one nurse for every ten patients and a matron available for every 100 wounded or sick soldiers. This was the first instance of some sort of organized nursing system for the military.

Women nurses served in both Confederate and Union hospitals during the Civil war. Besides hospitals they also served near the fighting front and on the battlefield. These brave acts earned the women the gratitude and respect from the soldiers that they helped. After the start of the Civil war, on June 10, 1861, Dorothea Lynde was appointed the Superintendent of Women Nurses. This appointment by the Secretary of War produced a nursing organization for the Union army. During this war approximately 6,000 women were employed as nurses. Of these women about 181 were black nurses that worked in U.S. government hospitals and convalescent homes.

Spanish-American War (1898) and Beyond

The Spanish-American War began on April 28, 1898 and it was during this war that nurses were appointed under contract to work for the military. Congress granted the Surgeon general the authority to appoint nurses to work in the military. Military nursing had not been required since the Civil War when nurses were known as “contract nurses”. Military nursing required a very high level of skill and competence and more than 1,500 women were employed under such government contracts from 1898 to 1901. During this time period nurses served in Japan, China, Hawaii, the Philippine Islands, Puerto Rico, and the United States and on hospital relief ships. The Vice president of the national society of the Daughters of the American Revolution, Dr. Anita Newcomb McGee, selected nurses for the Army.

The Spanish-American war exposed the many issues found in military structure. This produced reform within the military and among many changes the new chief of staff created the Army nurse corps, a group of nurses that were trained specifically in military nursing. This corps became permanent on February 2, 1901 under the Army reorganization act. Nurses were appointed to work for the army for a period of three years, although they were not actually commissioned army officers. If the skills and duties of the nurse were satisfactory then the appointment could be renewed at the end of the three year period.

Besides appointed nurses the new law required the surgeon 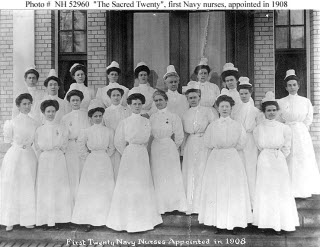 general to create a list of nurses that could serve during times of emergency. These women were typically those that had served at least six months in the army and were considered to be on reserve status. This was the very first reserve corps of women in the army. The first Superintendent of this new Army Nurse Corps was Dita H. Kinney. She was appointed Superintendent on March 25, 1901 and was formerly a contract nurse. She served in this position until July 1909.

When the United States entered World War I on April 6, 1917, 403 nurses were currently on active duty in the Army nurse corps. At this time 170 nurses in the reserve corps were ordered to Army hospitals in New Mexico, Arizona and Texas. As involvement in the war progressed more than 12,000 nurses were active and stationed in more than 198 locations around the world. These locations included six base hospitals in France that helped the British expeditionary forces. Bessie S. Bell served as the supervisor of nursing activities for American Expeditionary forces. Women that served in the Nurse corps during World War I did not have officer status and were not commissioned. This proved to be difficult in some instances as medics sometimes would not accept the authority of these nurses. This was eventually resolved after the war as nurses could receive officer status, with something known as “Relative rank. The relative rank meant that the nurse had rank but received less status and pay than the male counterpart. Additional recognition of the great contributions of nurses to the war included the many medals awarded to nurses. Some such medals included the Distinguished Service Cross and the Medal of Honor.

During World War I the Army School of Nursing was authorized and was used as an alternative to using nursing aides. This school began courses in Army nursing at several army hospitals during July 1918. The first dean of the Army School of Nursing was Annie W. Goodrich. This training provided all the necessary training nurses required that were specific to the military. There were many dangers associated with military nursing though no nurses died as a direct result of enemy action. However many nurses were wounded and about 200 died from pneumonia and influenza.

Nurses during this time were critical during the influenza epidemic that occurred in 1918. This was the most deadly epidemic that has occurred in history and more than 18 million people died of influenza. Individuals in the Army and that worked in urban areas and port towns were most susceptible due to overcrowding. Nurses contracted this flu while caring for patients.

At the start of the US involvement in World War II less than 7,000 Army nurses were active. During the first six months more than 12,000 nurses were active. Additional dangers were presented to nurses during this war when compared to World war I. Nurses were captured and were prisoners of war in Japan. They sustained causalities and were killed in flights. Th 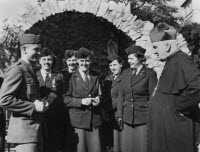 After World War II congress created the Regular Nurse Army Corps, created on April 16, 1947. This corps was part of the U.S. Army Medical Department and established the corps as part of the Official Reserve Corps. Besides the army these nurses were also able to serve in the Air guard and the Army National Guard. This new law ended the relative rank of nurses and granted nurses permanent rank and commission that was equivalent to male officers.

As in World War II, Army nurses served in locations very close to the front lines and in combat. They were the only women in the military that were allowed in combat theaters at the time. Nurses served in field hospitals, on army transport ships, hospital trains and at Mobile Army Surgical Hospitals (MASH).

With the rapid deployment of troops into Vietnam in April 1965 many nurses were dispatched to support these fighting forces. Several changes occurred in the Army Nurse corps during the Vietnam War. On November 8, 1967 any restrictions to female officer careers were removed. The women in the Women’s Army Corps and the Army Nurse Corps could receive the same promotion consideration as those applied to men in the Army. The first nurse in history that reached the rank of brigadier general was Col. Anna Mae Hays. She received this rank on June 11, 1970. Thousands of women served as nurses in Vietnam. Nine nurses died and several were wounded while serving.